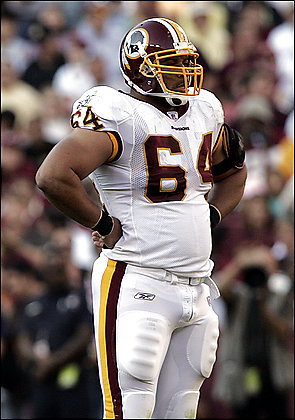 Redskins defensive tackle Kedric Golston is a big dude: 6-foot-4, about 315 pounds. “You think he’s just going to pick up his competitor and drop him in his belly,” is how Waleed R. Zarou put it.

Waleed is the owner of Don Corleone’s Brick Oven Pizzeria in Sterling, which is hosting this Sunday’s “Pros vs. Joes” pizza eating challenge. The team of “Pros” includes boxer Jimmy Lange, professional eater Ian “The Invader” Hickman and Golston. Waleed met with the second-year lineman to prep him for this weekend’s event, and even made him a pizza. You know, for practice.

“After like three slices I was stuffed,” Golston reported. “He was like, ‘Brother, you’re going to struggle in this competition.’ ” “I wasn’t too impressed,” Waleed confirmed. “I figure if I catch him after a practice, he’ll do more damage.”

“You know, I eat early and often, but not large amounts at one time,” Golston said. “I got guys on my team who just murder food. I don’t see how they do it.”

I mean, Golston has been a pleasant surprise on the line, but I really don’t think he’s cut out for this. He tried downing some Nathan’s hot dogs a few months ago, just to emulate the eating masters like Joey Chestnut and Takeru Kobayashi. “I ate like one and a half of them, and I was gonna burst,” he told me.

He’s careful about his health, so his meals are made up of chicken breasts and fish and protein shakes and broccoli, stuff like that. Not piles of pizza. “I’m totally going against everything I believe in,” he said.

Of course, this is all for charity–in this case, East Africa Missions, which concentrates on economic development in Kenya. And of course, Golston will be carried by his professional-eating teammate The Invader; the other two teams will be chosen from the “Joes,” or maybe “Janes,” who pay to enter the event’s raffle.

And even though Golston is presumably not hurting for money, he’ll be eligible for the more than $1,000 worth of exciting cash and non-cash prizes, including Redskins tickets, “if he wants to go see himself,” Waleed said.

Golston admitted that some of his football teammates might be more suited to this happening, which is 10 minutes long and will feature 18-inch pies, double-cut into 16 slices (to make the competitors feel better about their stats). (Also, the event will be emceed by someone dressed like Don Corleone, which might make for a good Golston photo op, if nothing else.)

Guard Randy Thomas has entered eating contests before; Golston labeled him “a legend” and said “I need to call him and figure out how to warm my stomach up.” Former D-linemen Renaldo Wynn and Joe Salave’a were “definitely in the top five” of Redskins eaters, but they’ve both been released. (Demetric Evans, though, is not an eating star; “he’s too pretty,” Golston said.)

He’s thinking maybe he should use scare tactics, try to intimidate his average-Joe opponents. He’s worried he might be his team’s weakest link. “I’ve been trying to drink a lot of water and a lot of bread to stretch my stomach, but it just ain’t been working,” he said. “You know, I’m going to try. If I can do three-fourths of one [pie], I’ll be pretty proud of myself. I don’t want to eat myself into a coma.”

The Dons' Pizza is a family-owned restaurant which has been in business since 2005. We have developed and refined recipes to offer a blend of New York and Italian style pizza. We offer the freshest ingredients including homemade mozzarella and imported Italian meats. Welcome to the family!